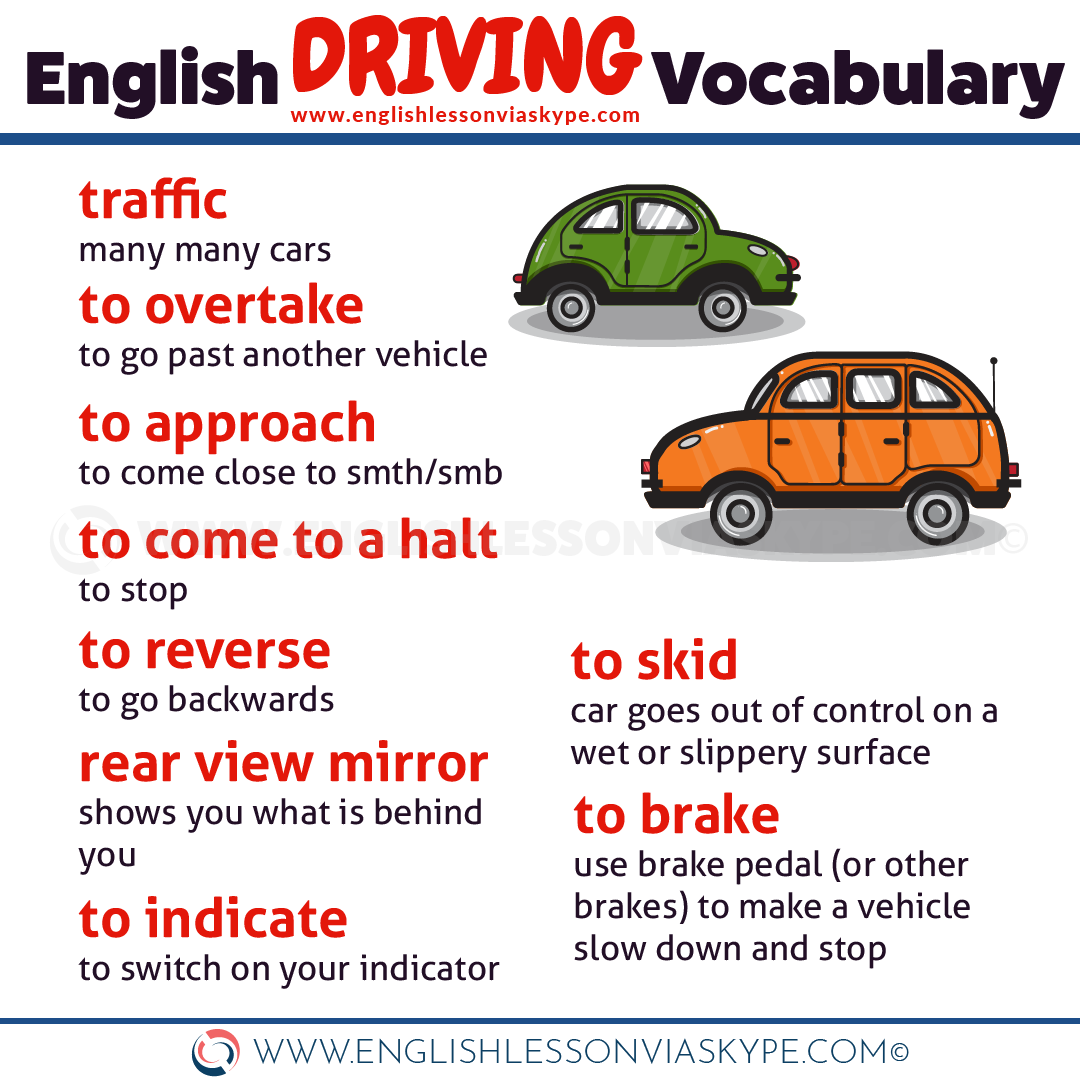 Find 17 ways to say DRIVING, along with antonyms, words, and example sentences at politedriving.com, the world’s trusted free thesaurus. 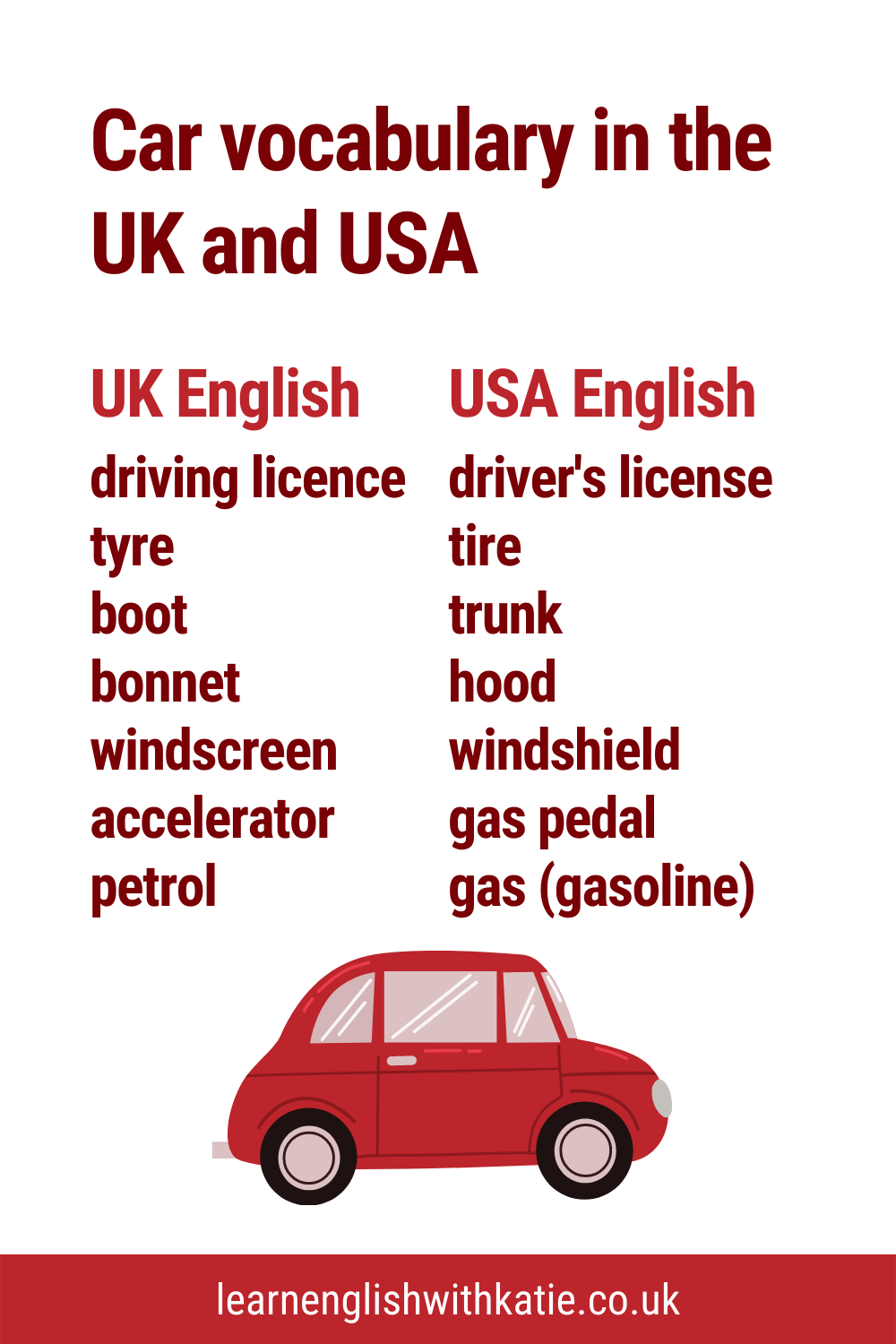 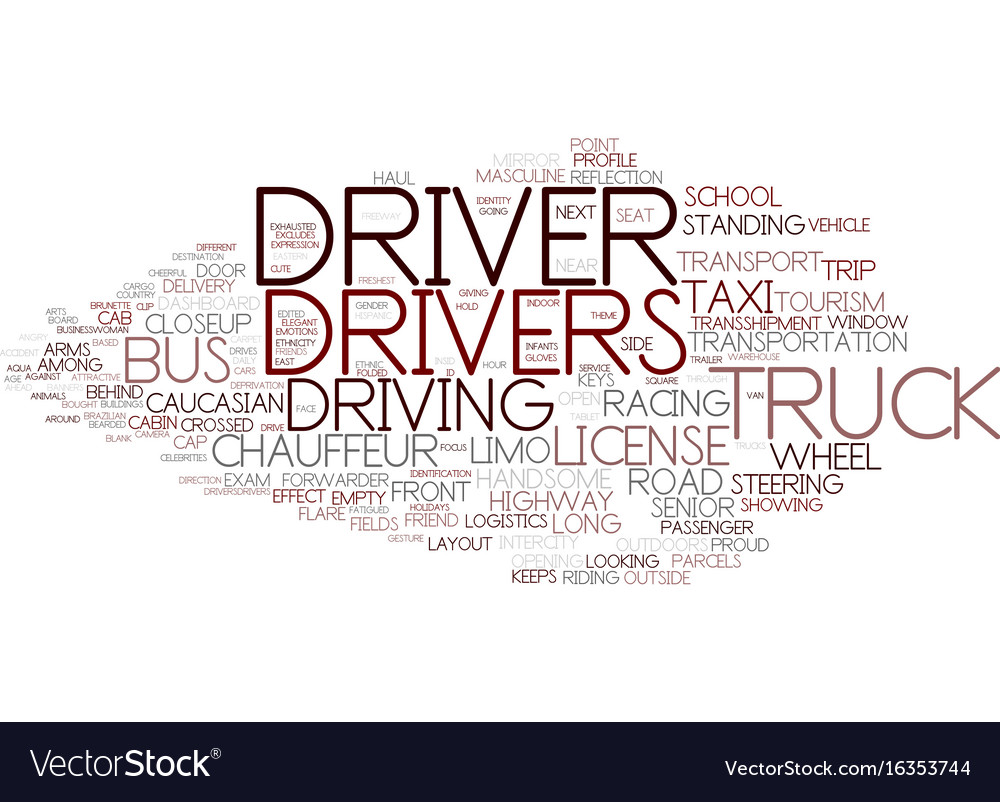 Aquaplane To slide out of control on a wet road surface. Automatic Gearbox The transmission will automatically select gears as the driver accelerates and decelerates. Black Ice Invisible ice that covers a road surface. Blind Spot The section of road behind the driver that cannot be seen in any mirror.

To see the blind spot, you should look over your shoulder before moving off or overtaking. Brake Fade Where brakes lose their effectiveness due to overheating and over-use. Brake Horsepower BHP This is the measurement of a car’s horsepower when it comes straight out of the crankshaft. Horsepower is often lost as it is transmitted from the crankshaft and through the gears.

So the horsepower that is delivered to the wheels is usually less than what is produced by the engine. Braking Distance The distance you must allow to slow the vehicle to a stop. Brow of a Hill The highest point of a hill. Carburettor This is a component that mixes the fuel and the air.

Car Handling How responsive and accurate the steering is. If you were driving through a bend and you needed to make constant alterations to the steering wheel then you could say the car had bad handling. If the car went exactly where you steered it, even at high speeds, then the car would be considered to have good handling. Carriageway One side of a road or motorway. Catalytic Converter A gadget fitted to the exhaust system that reduces pollution by turning harmful gases into less harmful ones.

Chassis The structure that acts as a mounting to the major car parts i. Chicane A sharp double bend used as a traffic calming measure – to slow traffic down. Clearway A road where no stopping is allowed at any time. The sign for a clearway is a red cross in a red circle on a blue background. Clutch The clutch enables the engine to be disconnected from the transmission in order to engage or disengage the gears.

Coasting Driving a vehicle in neutral with your foot pressed down on the clutch. Contraflow When traffic on a motorway follows signs to move to the opposite carriageway for a short distance because of roadworks. Convertible A car with a foldable or retractable roof. Also known as a cabriolet Coupe Car A car that is often the sports version of a saloon car. Typically they have 2 doors and are less spacious in the rear.

Dual Carriageway a road or motorway with a central reservation. Engine Coolant Liquid in the radiator that removes heat from the engine. Engine Litre Size You may have seen a car advertised or referred to as say a 1. One cylinder may have a space of 0. This measurement is also known as engine displacement.

Estate Car Has an extended rear cargo section and the full height of the car extends to the boot, which gives a much larger storage space. Exhaust Emissions Gasses that are expelled from the exhaust pipe. Fog Lights Extra bright rear, and sometimes front, lights that can be turned on when visibility drops below metres. Ford Where a road passes through a shallow stream or river. This allows for better grip and traction.

This is where the power is sent to the front wheels and these in turn drive the car. Fuel Consumption The amount of petrol or diesel that your vehicle uses. Fuel-Injection System A computerized system that mixes the fuel and air before it passes into the engine for combustion. Gears Control the speed of the engine in relation the the vehicle’s speed. Hard Shoulder The single lane at the left-hand side of a motorway that can be used in an emergency or when road signs give permission.

Hatchback Are often like estate cars but have a much smaller boot, which can always be accessed, from the rear seats. Hazard Warning Lights Flashing amber lights on a vehicle that can be used to warn other drivers that you have broken down, or to warn other drivers on a motorway that there is an hazard ahead. Complicated this one but basically an inventor called James Watt calculated that one horse could do 30, foot-pounds of work in one minute.

Manual Gearbox Where the driver physically selects the gears themselves. MOT A test to check that your car is safe to drive. Van like but designed for personal use. Over Steer If when driving through a bend and the rear wheels fail to follow the front wheels and instead veer towards the outside of the turn, you are experiencing over steer.

Pelican Crossing A crossing with traffic lights that pedestrians can use by pushing a button. Cars must give way to pedestrians while the amber light is flashing. Power Steering Makes turning the wheels a lot easier. Means the car has a separate power source that helps turn the wheels. Priority The vehicle or other road user that is allowed by law to go first is the one who has priority.

Road Hump A low bump built into the road designed to slow traffic down. Rumble Strips Raised strips across the road near a roundabout or junction that change the sound the tyres make and warn drivers to slow down. They are also used on motorways to separate the main carriageway from the hard shoulder. Saloon Car A car with 2 front seats, at least 2 rear seats, four doors and a separate boot.

Separation Distance The amount of space you need to leave between your vehicle and the one in front so that you are not in danger of crashing into it lf the driver suddenly slows down or stops. Single Carriageway A road with one lane in each direction. Skid When the tyres fail to grip the road, the subsequent loss of control of the vehicle’s movement is called a skid. Often cause by harsh braking or steering, or driving too fast. Stopping Distance he time it takes to stop a vehicle – made up of ‘thinking distance’ and ‘braking distance’.

Tailgating Driving too closely behind another vehicle. Thinking Distance The time it takes you to see a hazard and apply the brakes. Toucan Crossing A pedestrian crossing that does not have a flashing amber light phase, and that cyclists are allowed to use. Torque is a measurement used to quantify the force of the rotational force produced by the engine.

It is another way to measure the power of a car and is calculated in foot- pounds ft-lbs. Under Steer If when driving through a bend the steering wheel doesn’t turn the wheels as much as you want then the car has under steer. Valves Each cylinder has valves; ones that allow the fuel-air mix in intake valves and ones that allow the exhaust fumes out exhaust valves. Every cylinder needs at least one intake and one exhaust valve. A valve engine is likely to have four valves on each of its four cylinders.

Wheel Balancing Wheels need to be balanced correctly as this allows them to rotate smoothly at all speeds. Wheel Spin When the vehicle’s wheels spin round out of control with no grip on the road surface. Zebra Crossing A pedestrian crossing without traffic lights. It has an orange light, and is marked by black and white stripes on the road.

Drivers must stop to to let pedestrians cross. Our footer.